Yes, I realize I have very…specific interests, but there is nothing, nothing, nothing I love more than–or delights me as much as–finding out things about Superman than I didn’t know before.  In fact, I’m not even sure I knew that was possible at this point. But I’ve just spent the last three days immersed in this: 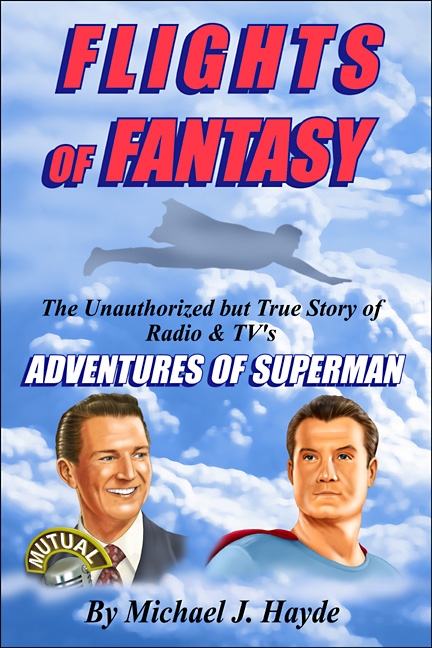 –and this book fills me with a stupid, giddy glee usually reserved for high-school girls in line for Jonas Brothers autographs. Because of how much it added to the canon and the mythos, I’m as big a fan and student of the 1940s ADVENTURES OF SUPERMAN radio program as anyone alive, and I thought I was the expert. I was wrong. Added bonus: I learned GOBS from Flights of Fantasy about the 1950s television show.

The book is well-written, well put-together, detailed without being mind-numbing (YMMV), and a testament to stupendous research. Author Hayde takes nothing for granted and meticulously debunks a lot of the old, labored anecdotes that we’ve long since come to accept as fact (such as the old story that George Reeves’ role in FROM HERE TO ETERNITY was trimmed to near-nothing because audiences were too distracted by “Superman,” or that kryptonite was invented for the radio “so Bud (Superman) Collyer could get vacation time by playing ‘unconscious’ “–neither true). The episode guides in the back are the best I’ve ever seen and include pages and pages of unfilmed “lost scenes” from the original scripts and detailed synopses of two unfilmed episodes I HAD NEVER HEARD OF.

And–AND–added bonus–while the answer isn’t directly stated in Hayde’s book, his work led me down a new path of research that gave me my new favorite hardest-ever Superman trivia question (which will be a relief to those of you who are sick to death after ten years of hearing me smugly ‘face challengers with “What was Lana Lang’s mother’s maiden name?”)

Again, I realize that the Venn diagram of people who read this column and people who as fanatical about this material as I am has very little overlap…but, man, I am over the MOON about this book.