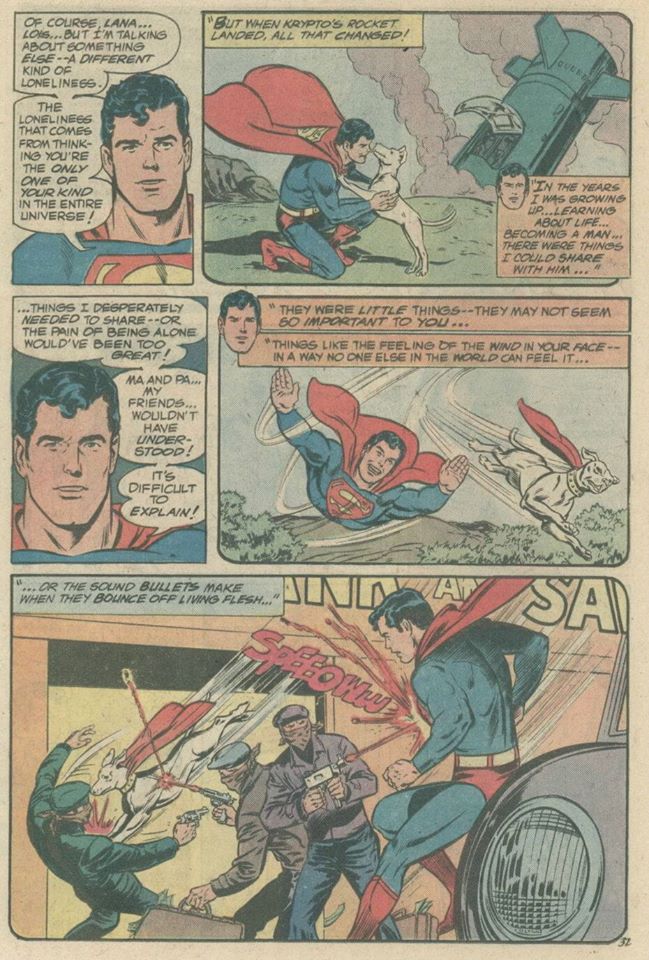 I can, though. I can point to a page in a comic book.

Martin Pasko and Elliot S Maggin, I have said, were the two strongest influences on me as a writer. That's because they had a gift for taking one-dimensional characters that I loved and bringing out their humanity, a gift for connecting me emotionally with their adventures. Marty, specifically, wrote one page of Action Comics #500, a life story of Superman, that when I was a teenager showed me the familiar in a brand new light. It was a scene where Superman was recounting the story of his dog, Krypto, and explaining how much it had meant to him as a boy and as the sole survivor of his race to finally have a friend at his side who took away his loneliness. A friend to share things with him, "things I desperately needed to share, or the pain of being alone would have been too great. Things like the feeling of the wind in your face in a way no one else on Earth can feel it, or the sound bullets make when they bounce off living flesh."

Nothing else I have ever read has ever affected me in quite the way those words did. To me, they were the key to everything: the lesson that if you're going to write about these characters well, you have to live inside them. You have to wear the suit and think hard about what your daily life, minute to minute, would be like if you could fly like Superman or had Daredevil's radar senses. What moving objects would look like to you if you were fast enough, like the Flash, to live between the ticks of a second. How the subatomic world would appear to you if you were the Atom. How your hearing on land would be compromised as Aquaman because water conducts sound more efficiently. Whether or not heat vision carries with it the faint smell of ozone. Tom Peyer calls it "writing about the superhuman condition." It's how Marty taught me to write with that one page, and it became the absolute bedrock foundation of my style and, frankly, my career.

I'm glad--very glad--that I was able to tell this directly to Marty more than once before he passed away of natural causes, today, at the too-young age of 65. Marty was a friend, a good guy, an unwitting mentor, and had talents I could never hope to replicate. There's no way I'd be where I am today without him. Thank you, sir, and rest in peace.